Inspired by a previous post on the locations of the July "Who is hiring" thread on Hacker News, I wrote a script to pull down all the who's hiring threads and display trends of requested languages, frameworks, data management, and mobile operations [1,2,3].

Let me know if you see any languages, frameworks, data, etc missing, and I'll try to post an update soon.

[3] The request frequency on the y-axis was calculated by finding the number of occurences within all the comments on a Who's Hiring page (ex: some comments many mention Ruby twice and that is counted two times). Additionally, Some terms were merged to correspond to common usage:

Please let me know if you see any I missed.

If you're a software engineer and you've ever wanted to live in New York City, the time is now. Nearly every company in NYC needs software developers. For non-technical people, it is becoming a crisis. For software engineers, it's great news. Local developers are getting poached left and right, but we'd much rather fuel the NYC tech growth with more engineers instead of playing musical developer chairs.

Due to high demand and the growing accessibility of funding in NYC, salaries and equity arrangements for developers have never been better. It's routine to see developers just a few years out of school making >$100k or receiving generous equity grants, often over 15% as the first employee after founders. If you've ever felt undervalued as a software engineer, now is your time. Hiring managers and non-technical executives have realized the value of great technical talent and are working furiously to attract developers.

The technical community in NYC has really come together as well. You could go to technical and startup events every night of the week if you wanted (Ex: NYC Ruby, NYC Python, New York Scala Enthusiasts, Lean Startup, NYC Tech Talks, and Hack & Tell). There are burgeoning hacker spaces, cafes, and coworking spaces (Ex: New Work City, Hive, Ace Hotel, and General Assembly). There's even an awesome way for out of town developers to meet other techies or find a place to crash: Adopt A Hacker.

Here are a few examples of cool NYC tech companies: Gilt Groupe runs luxury fashion sales and built and open sourced Hummingbird to monitor them. SeatGeek helps you get the best ticket prices for sporting events using data. Etsy is a marketplace for handmade goods and treats code as craft. Yipit aggregates a multitude of daily deal sites and encourages hackers to become founders.

So, what's the best way get into one of these companies if you live somewhere else but want to join the party in New York?

For the past few months, Hirelite has hosted in-person and web-based speed interviewing events to unite software engineers and companies. Developers can quickly evaluate multiple companies through a series of 5-minute interviews over the course of 2 hours without having to take off work (the events are at 7pm). So far, we've only accepted developers and companies already in NYC, but for this event, we're opening up registration to all back-end and generalist software engineers who can work in the US.

Our next events will be on Monday, November 1st at 7pm EST and Tuesday, November 16th at 7pm EST. Both events will be web-based, using live video chat so that you can interview a series of companies without leaving home. It's a great way to sample the job market quickly. To register for either of these events, visit Hirelite.com. We've got a great group of companies lined up with more on the way. 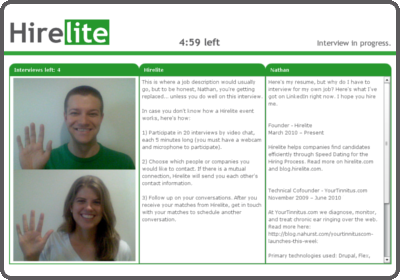 Our in-person "speed interviewing" events have worked so well that we're expanding to web-based events. On Tuesday, July 27th, Hirelite will host its first web-based event for software jobs and software engineers in New York City.

Get your webcams and microphones ready for efficient, face-to-face interviews, just like our in-person event but even more convenient. This web-based event will last 2 hours and feature a series of 5-minute interviews with either software engineers or companies. Since you can only get through so many interviews in 2 hours, we're capping attendance at 20 companies and 20 software engineers. 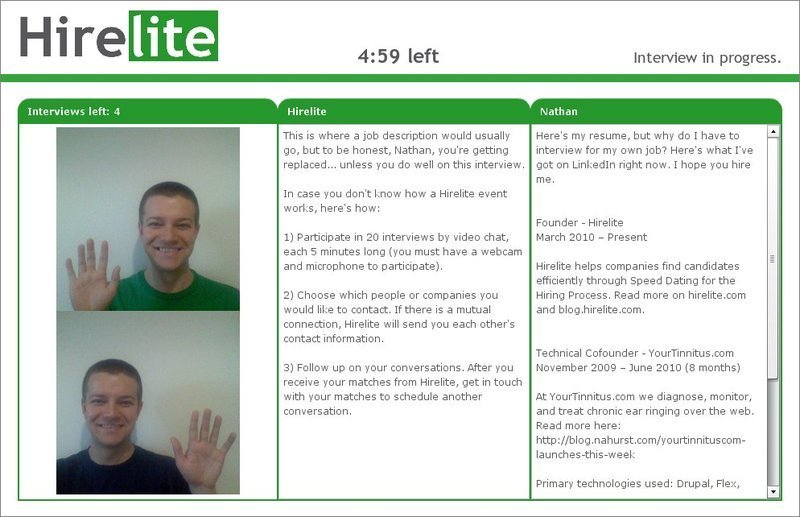 Over the next few months, Hirelite will expand to other cities. If you're interested in Hirelite coming to your city, let us know!

Results of a Speed Dating Event for Hiring Software Engineers

On Tuesday, Hirelite hosted its first event, Speed Dating for the Hiring Process, to connect software engineers with companies looking for technical talent. In short, we learned that companies and job seekers like the speed interviewing format because they can quickly evaluate many possible matches on what's most important to them - cultural fit. Also, speed dating for hiring is way less awkward than speed dating for romance.

How did the event work? Each job seeker interviewed with each company for 5 minutes then rotated to the next company. At the end of each interview, both the job seeker and the company indicated if they would like to contact each other on a form they received at the event. After the event, Hirelite sent job seekers and companies their matches' contact information. Screening and AttendeesHirelite requires job seekers to pass a brief programming test in the language of their choice to register for the event. Most applicants had no trouble with the programming test, but we did get some responses from job seekers who clearly could not code. One response completely ignored the question, "I don't program but I have a lot of technical experience and would really like to come." Simple, to the point, and not suited to this event.Job seekers in attendance were primarily Hacker News readers or their friends. They showed substantial technical ability, especially with web and mobile development. The developers that came generally had a broad base of skills spanning multiple programming languages for both back-end and front-end development.Companies including single founders looking for technical cofounders; angel-funded startups; VC-funded startups; and larger, established companies attended. Most companies were very comfortable with just finding great developers and letting those developers learn (or create) their company's tech stack. From feedback on the event, both job seekers and companies primarily made decisions based on cultural fit because the overall quality of the attendees was so high. The event's language-agnostic approach provided optimum value to both job seekers and companies: many developers didn't want to work for a company that would pigeonhole them, and many companies believed that the best developers would be able to pick up whatever technology they used. However, some larger companies sought separate events for different languages (ex: one Java event, one Ruby event, etc). We'd love to hear what you think about both scenarios: specific language-focused events vs. language-agnostic events. MatchingWhen both a company and a job seeker wanted to contact each other, Hirelite alerted both parties of the match after the event. Companies and job seekers were free to share business cards and resumes at the event. This matching step ensured that companies and job seekers didn't waste time with parties that were not interested (in addition to ensuring that job seekers and companies had each other's contact information).Though the quality of both the job seekers and the companies was very high, not everyone got matched with everyone else due to the importance of cultural fit we mentioned above. Now for the data:

However, this difference in selectivity was not statistically significant. Additionally, it's important to note that the job seekers approached the companies (companies stayed and job seekers rotated), and speed dating research has shown the party being approached to be more selective.

These wishes to connect translated into the following matching profile:

After attendees receive their matches, it's their responsibility to follow up with each other as Hirelite is not meant to replace the entire hiring process. Hirelite is a quick way to get people with technical talent directly in contact with companies that have a strong interest in hiring them.

Next UpIn our next post, we'll feature tips for both "speed interviewing" and traditional interviewing based on what we've seen. Follow us or sign up for email updates to be alerted when we post. Our next event is on Tuesday, April 27. As with our previous event, we're capping attendance to 20 companies and 20 job seekers, so register to reserve your spot.

I'm on the technical side of entrepreneurship in NYC. I love programming, board games, and my wife. I lead engineering at the world's largest educational marketplace, Teachers Pay Teachers.

Find out more about me at nahurst.com.
Browse the Archive »